Lucy in the sky with diamonds 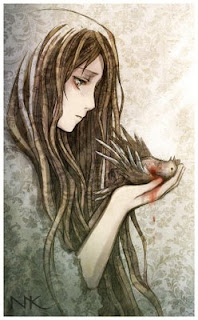 The girl tries to clean the puke spots with her old handkerchief.
She unfolds and sits on it.
What a silly girl!
She seems tired, but she was so quiet.
She could not remember when the last storm had broken into
Her sweet marmelade world.
She rehearses some sadness.
What an enigma. Nothing comes.
Then she puts on her smile.
Not any smile we would see on tv
She puts that devious smile on.
And she looks up.
The sky is pale blue.
She tries to make it bluer, brighter
as she is
But she can't.
The sky keeps dim and indifferent.
Some people wave to her from a distance and she is unsure
whether they are true or just a mirage.
She feels she cannot feel anything.
The sky, the waves, herself.
She feels some happiness settling a dwelling in her
frigid heart.
But it's like two bodies occupying the same spot.
They are divided, they do not mingle.
She sees the boy approaching and she cringes.
What a foolish girl!
He puts his hands between her thighs and twinkles.
But she averts her glance and looks up.
She thinks abou suicide
But she was never given a diamon yet.
So it's no fun at all, she knows she can't.
The boy is fleeing.
The girl closes her eyes and imagines what it would be like if she did not exist at all.
She wishes she could blink in and out of existence.
What a preposturous girl!
Then, she decides to travel.
But she doesn't know if she is going to estonia or not.
She feels Venus is no longer in Scorpio and maybe Saturn is taking over.
What a lack of perspective, girl!
She goes to the margin of the lake
And cries and the tears ooze on her cheek to her chin and they reach the reflection of her own blurry image and she sees the sky.
More tears and they are her present to the sky under her.
She wants to tell the world, but she remains silent
Mute as in a vow. that's her new voice.
she can start packing now.
Be sure you kiss her goodbye, I don't think she is ever coming back.
Postado por The tone às 17:08