So we woke up and we had something to eat. Soon Lorenzo would go to the station to pick up the girl from Hong Kong. I have to admit I was not so happy about losing the post of only couchsurfer, but he had told me she would sleep in the mattress on the floor and I would still keep the bed to myself. When she arrived with him, we had the introduction time and she seemed to be a nice girl. Lorenzo had to go somewhere and he let us there, in that awkward situation of I don’t know you very well. Her name was Joyce. A short and very lively girl, I felt we would hit off right away. Lorenzo had to leave for some reason and we stayed there, so that she could settle and we could get to know each other better.She was very kind as to offer half of the sandwich she had stolen from the breakfast at the hostel. It was cheese, so I had no reason to deny it. have I mentioned I love cheese? Before Lorenzo was back, we decided to go for a walk around the city. We should have thought better, especially after my experience in Berlin on the 25th. It was January 01 and the museums would not likely be open then. But instead of checking the net, we just left. I discovered she studied tourism so she had a different eye to whatever referred to hotels and the like. We had a guide from Vienna, but we were not so sure of what we were going to. I realized I had very poorly planned this trip. I should have studied what there was in each city and shortlist to 4 or 5 places I had to see. But I did not do that so I would have to look for the places on the spot. She didn’t have many preferences either. We were just going places, not an exact destination, roaming the streets, trying to get downtown.
We went past squares, statues, closed museums. She did not feel like entering Albertina. It was open, but it was not so appealing to her. so we kept going and I don’t remember how many places we went to, I just remember the frustrating impression we got that most of them were closed.
I was eager to visit the Museum of Freud. Why? Well, I had always liked to read his writings, I thought his lessons about knowing oneself were very relevant. I had studied a lot about subjectivity at university and psychoanalysis only came to help in those studies.
Anyway, one thing that amazed me was that Joyce was a supercurious girl. She asked me so many things about completely everything she could. I had to think fast and try to give her very deep answers. Some of them I felt so unable to answer. We talked about mythology, concepts, Plato, Brazil and its customs, Austrian, French people... name it and we probably exchanged some words about how it was invented or created. It was the perfect opportunity for me to face how much I have no idea about and that sometimes we cannot have a formed opinion about everything.
So, she told me it would be very nice to go to the Freud museum, but she asked me who Freud was. Another taken for granted fact. She had never heard of him. So I had to tell her, with much pleasure, whatever few details I knew about him. And as we got there, how lucky, it was open. We talked to the girl at the reception and she told us they would close in 15 minutes so we wouldn’t be able to buy a ticket. We should come back the next day. So, we had left the only open museum as the last one of the list and even then we were not admitted. As Alanis would say “Isn’t it ironic? Don’t you think?”
We had one glimpse of what was to come inside by taking a picture of wall of the staircase which led to the reception. 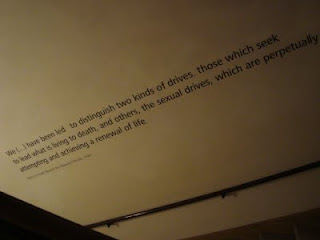 After leaving the museum, we felt it would be better to return home and relax a little of doing almost nothing but walking in the cold and trying to visit closed places.
As we arrived at our dear host apartment, he was not there. It was funny because he had an extra set of keys for couchsurfer, something I had not heard of till my stay in Prague. however, he had not found them and we had to leave keyless and he would open the door for us as soon as we got back from our journey. We rang the bell. No one answered. We tried again. Nothing. Joy had a cellphone which was working and we tried calling him. He was not so close, he would take some hours to come back. We were cold and tired of the walking. What could we do? Well, there was a café just around the corner. We could go there and have something to warm us up. And so we did. The place was very exotic. It looked like those diners or bars you enter in a small town and the music stops, everyone stares at you, they know you are foreigner and they hostilize you just because it seems they are supposed to do it. Nonetheless, we were not so much hostilized. In fact, we were ignored. We asked for some menus and saw we had options of sandwiches and other appetizers. We ordered some drinks, Joy some beer and I tried a drink with wine and soda. It was a ridiculous drink and I hated it because it tasted like sprite and artificial strawberry juice. It was a drink for kids. The name of the place was Café Magistrat. Powerful but quite exotic. 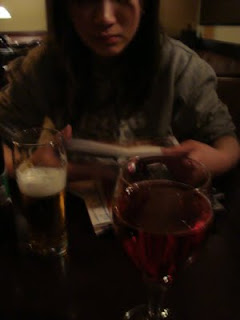 This did not refrain me from trying these exotic drinks and foods, which I had no idea what were till they got to my table. Then, we talked and paid attention: every once in a while a kind of bell would ring. A woman would go out with a man, which resembled a security guard in his garment and style. It kept happening for quite some time and we wondered if that place was a place of mafia meetings because the atmosphere looked like that.
Then Lorenzo arrived and got us there. When went home, took a shower and started thinking what we should do. He said he was sorry he could not have gone out with us, but maybe at night we could make up for that. We were a bit hungry so we decided to go to a restaurant. We walked to one, but it was too crowded so he said we should head for another one. There, we were in doubt about what to choose and he suggested some traditional Viennese dishes (or were they Austrian? I don’t remember.) I know each of us asked for something different and I was the only one to ask for a soup as a starter. It was funny to see how he soup started to be a kind of travel companion. It marked how different it was from here. We posed a little bit and took some pictures with or without the food. We had a lot of fun together and as usual I offered to eat Joy’s leftovers, which she could not eat anymore. I hate wasting food, so I am known among my friends among that person who finished the unfinished dishes. I wouldn’t do that there, I had no idea whether it would sound rude or anything, but I was brave, so why not?

After dinner, we strolled near the river and we saw a beautiful building. According to our host, it was a fancy restaurant and the ceiling was a piece of art. It was a beautiful view. He said we could go there next day by sunset to see it and to drink some very expensive coffee because it was a pricey and fancy place.
I suggested we went to a karaoke, because I like to take any chance I have to sing and he took us to a bar, and this time I blessed couchsurfing because it was in a kind of alley, I would never find it there, and we sang some songs. We stayed in a different room and all the people were by the bar, but at a certain moment of the night we interacted with the guys from another table. The highlight of the night was me dancing with Joy and Lorenzo singing like a pro Sinatra “I did it my way”. He was singing and I was looking at him, dazzled by his talent and voice and he would smile at me and sing on and I wished I could freeze time and stop there, at that moment, his singing and his beauty pouring on him like breeze and drizzle. The lights were low and the video I made could barely show him and make justice to the way he was singing, with his heart. Another moment for my collection of magical ones.
We walked through an alley and Lorenzo told us the story of “Der liebe Augustin”. There was a bar with this name, resembling those medieval inns, but we just saw it from the outside. We were not so into entering. We were quite tired and preferred to go home in order to save some energy for the next day.
Postado por The tone às 04:14 Um comentário:

So, it's such a been long time I don't post anything here. I am sure people have already lost hope I would ever finish my trip stories and I gave up about half way through. In fact, I thought it would be so, as life got me in such a context I felt things would never be under control again. Every week a couple of new problems to be solved, of things to be done for yesterday, and time went by flying on wings of a boeing. I didn't want to be away. I was put away, and that's all.

But here I am. As the phoenix, I keep coming back from the ashes, somewhat better, somewhat stronger.