During the first night nothing happened but it numbed a little bit our senses and we were slow as we decided to take the train to go to Gare du Nord, where we would take the Thalys train. We received a new Ticketless card, so we had no paper telling us what time our train would leave and then we had to try to recover from our subconscious what time we had to be there. Carol had no idea we had to take a train and would arrive in the station only half an hour later. First obstacle, which ticket to buy. There were some machines but were the more expensive ones the tickets to take us from the airport to downtown. 8 euros or 2? (a friend told us later we should have bought the cheapest one and if we were stopped we should say, well, we didn’t know.) Then we got the train and we saw it was snowing. The day was still dark and there were only some more people in the same wagon with us. The funny thing is that there was a blond guy and he was talking to an Asian girl and though they looked like a couple, he could not help staring at us (especially at Carol). Strange, dear, but true, dear.
As soon as we got to Gare du Nord, Carol kept saying it was too late and too late and I told her we still had time. But I could not be sure. So we gave our cards to the guy with the funny uniform and he read it with a machine and he told us what we most feared - our train was the previous one, so we had missed it. I felt devastated. And if we didn’t think fast, we would miss this second option. The guy was very nice to tell us we should enter a specific wagon and wait for him there. We were nervous and pissed we had missed our train. We boarded and waited for the guy and then I looked outside the window and realized it was snowing a lot. A lot of snow and we hadn’t even paid attention it was snowing at all.After some minutes the train left the platform and we felt good for going to where we should be but how much this lack of attention would cost us. In the end it would cost 88 euros each, the double of the smallest fare but the guy was sympathetic to our despair and he charged us 98 for both tickets. Not so bad, but we should not have missed anything.
Half sleeping and swimming in a mix of self-punishment, self-pity, we arrived in Belgium in no time. Off the train, we should try to call Louis for him to know we had arrived. This, however, was not necessary. As soon as we arrived at the hall of the station I could see him looking around, looking for us. Carol almost went past him because she did not recognize him, he had shaved and had his hair cut short.
The first thing we did was to have a glimpse of Brussels. It was all white with snow. And there was a not so serious traffic jam downtown. I guess it was for us not to feel homesick. The first place we went was a bakery. It was so interesting to see all those different types of biscuits and breads. The shapes and the colors (and very likely the tastes), everything reminded us we were definitely far from home. The streets to get to Louis’s house were surrounded by trees. And these trees were so full of snow on them that we could not help thinking we had just entered the kingdom of Narnia. Although we had seen it in pictures, the quantity of snow, the light of that time of the day, everything worked so as to give us a sensation of magic, of exoticism. 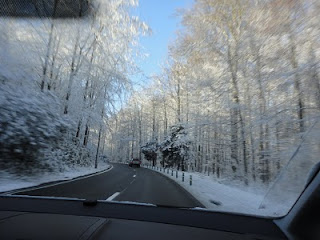 After this we headed to the place which would shelter us in the following days. Our friend’s house. As soon as we arrived, we were taken to have a tour around the house. It was a big but very cozy house. It seemed one house we see in movies. And it was the moment to get to know some members of his family. They turned out to be very nice and warm people, who made us feel totally at home. The funny thing was that, in a different place, we should have been more than eager and ready for adventure, but a night at the airport had made us tired. We had to take a quick nap and a shower. And we did so for half an hour. (Ok, it was more than that, but the new beds were so inviting). We woke up and it was still day. We had not forgotten we would have less hours of light so we should leave soon. So, Louis took us to a museum and a park and we had a lot of fun there: the first thing that happened was our first snow fight. We had a disadvantage over our host because we could not make a ball out of snow - it would collapse before hitting the target. So he taught us how to do it and the balls were better. After that, we were walking in a very white park and suddenly Louis started yelling at Carol because she was stepping on the “grass”. In fact it was covered with snow so he knew it was grass over there because he knew the place. And there really was grass under the snow, but with all that cold our steps would be the least of their problems. Finally, another funny thing that happened was that we had a lot of snow on the ground but it hadn’t snowed since we arrived there. So we tried to make it snow by shaking some trees. The effect was not exactly what we expected as it was difficult to control where it would fall, but we tried. 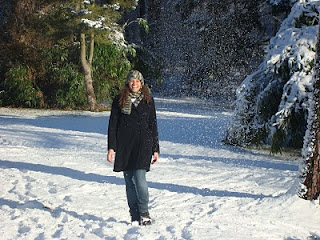 Then we got hungry and it was time for our first Belgian meal. We went to a stand and bought some fries with some other fried things. Some traditional sauces to go with all that fat. But it was just delicious. We had what Louis called a “poor Belgian meal”. Then we did more. We were taken to a walk downtown. It was a bit cold but we could see some interesting spots. We got to a street market and had some hot wine. But then we went to a fancy place, a type of restaurant to have some chocolat chaud. It was a top one, expensive indeed but worth every cent of it. Louis was eavesdropping the next table conversation: it was a couple arguing in a very polite way. We could not understand what they were saying but he was translating to us and we were commenting in Portuguese. The attendant realized we were speaking Portuguese, we felt embarrassed she might have understood so we decided to mind our own business. =) Afterwards, we saw a show of lights in a building and finally went to a bar - Delirium is its name - with about 200 types of beer. Of course, I chose a girlish one, with fruits and very sweet but this is just me, into sweet drinks. And we went home. We tried to watch a movie, one about the singer Claude François, but I guess none of us saw it more than 15 minutes. It was dark, it was warm. So let’s go to bed.
Postado por The tone às 13:31